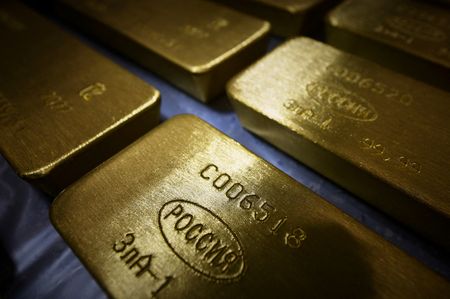 (Reuters) – March 30 (Reuters) – Gold prices rose nearly 1% on Wednesday, supported by a retreat in the U.S. dollar and renewed doubts about the possibility of a ceasefire between Russia and Ukraine.

The Kremlin on Wednesday welcomed that Kyiv had set out its demands for an end to the conflict in Ukraine in written form, but said there was no sign of a breakthrough yet. (Full Story)

Gold prices dropped as much as 1.8% on Tuesday after Russia pledged to cut down on military operations around Kyiv and in northern Ukraine, but bullion pared most of the losses to settle just 0.2% lower for the day. (Full Story)

Markets also were keeping a close tab on the U.S. 2-year/10-year Treasury yield curve, which briefly inverted on Tuesday, as bond investors bet that aggressive tightening by the Federal Reserve to fight soaring inflation could hurt the U.S. economy. (Full Story) US/

Bullion is considered a safe store of value during times of political and financial uncertainty. It is also viewed as a hedge against rising inflation.

“A strong bounce-back in crude oil prices from this week’s low is also a bullish element for the metals markets, as well as the rest of the raw commodity sector,” Jim Wyckoff, senior analyst at Kitco Metals, said in a note. O/R