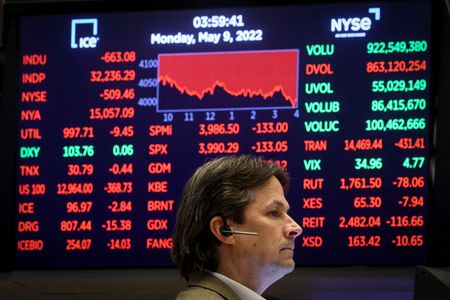 Bank shares fell along with yields. The benchmark 10-year note yield dropped from more than a three-year high to below 3%.

The Dow also ended lower, and the day’s trading was choppy, with major indexes moving between gains and losses as investors were nervous ahead of the release of Wednesday’s U.S. consumer price index data and Thursday’s producer prices data.

Investors will be looking for signs that inflation is peaking.

Worries that the U.S. Federal Reserve may have to move more aggressively to curb inflation have driven the recent selloff in the market. A host of other concerns have added to the pressure.

“It can’t just be the Fed’s going to raise rates to stave off inflation, because we’ve seen that before,” he said. Instead, investors have been worried about everything from rates and inflation to the war in Ukraine, supply chain problems and China’s COVID-19 lockdowns, Dollarhide said.

Shares of Apple Inc rose 1.6% and gave the S&P 500 and Nasdaq their biggest boosts.

Technology and growth stocks, whose valuations rely more heavily on future cash flows, have been among the hardest hit in the recent selloff. The Nasdaq is down about 25% for the year so far.

Investors digested comments from Cleveland Fed President Loretta Mester, who said the U.S. economy will experience turbulence from the Fed’s efforts to bring down inflation running at more than three times above its goal and recent volatility in the stock market would not deter policymakers.

U.S. President Joe Biden in a speech Tuesday addressing high inflation said he was considering eliminating Trump-era tariffs on China as a way to lower prices for goods in the United States.

On the down side, Peloton Interactive Inc dropped 8.7% as the fitness equipment maker warned the business was “thinly capitalized” after it posted a 23.6% slide in quarterly revenue.

Volume on U.S. exchanges was 15.45 billion shares, compared with the 12.55 billion average for the full session over the last 20 trading days.

Declining issues outnumbered advancing ones on the NYSE by a 1.36-to-1 ratio; on Nasdaq, a 1.34-to-1 ratio favored decliners.